The Execution of William Kemmler 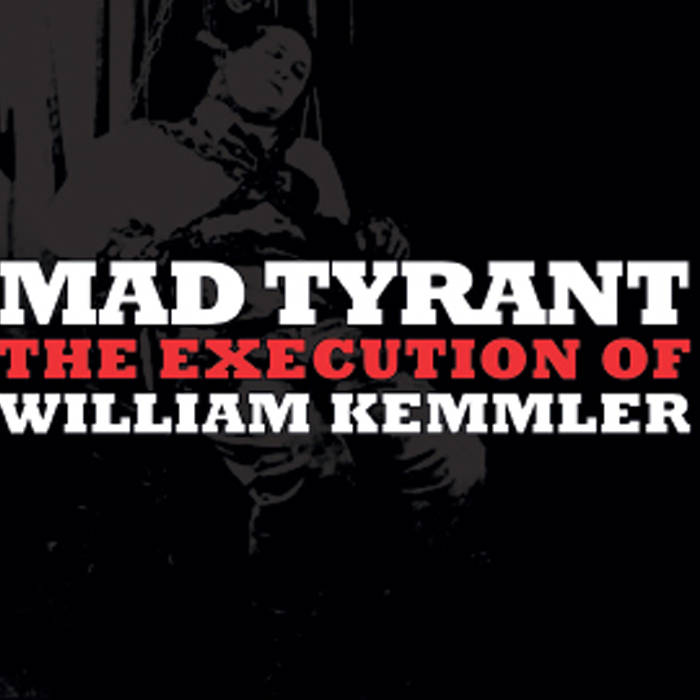 sounds designed to make humans recoil in disgust and pain. The theory is this: Mad Tyrant’s extended work “The Execution of William Kemmler” does NOT mean to replicate the turmoil occurring inside the brain of the first convicted murderer claimed by The Chair. Rather, it takes us inside the brains of those luckless motherfuckers who supervised, invented and powered the whole thing — them who witnessed Kemmler’s contorting body and could only imagine the sights it saw; who noticed that, even after the first jolt had flowed through it, the body continued to breathe. What dreams did THEY dream? To see a human cooked like a lump of meat and find your own hand holding the pot: that’s gotta fill your dreams with crackling torment, from which you wake screaming if you’re lucky. “The ghost of electricity howls in the bones of her face,” is what Bob Dylan called it. George Westinghouse, bard of the alternating current and witness to Kemmler’s singe and stench, was less poetic: “They would have done better using an axe.”

Mad Tyrant’s godawful racket describes a profound empathy. It’s the empathy of torturer with tortured, of a kid lighting magnified ants afire because he’s not allowed to do much else. Remember, empathy isn’t just love-thy-neighbor stuff; sometimes it’s loathing yourself as you loathe others, self-immolation. When Tyrant booms low frequencies over and over like a heartbeat on the snuff, are we hearing Kemmler’s heart or the blood pounding inside his executioners’ temples, or are we simply hearing a signal of exquisite pain, Morse code from one sicko to another? Yes yes yes. As much as the Tyrant likes to paint a pretty picture — sparks flying, the ping pong of eyeballs inside a skull, lightning bolts jumping between semiconductors or some shit — his main concern is forcing fellow meat lumps to hear the unhearable, the heretofore unheard, the sound that doesn’t equal a word. So, BOOM — it’s The Execution of William Kemmler because you gotta call it something, but also because Mad Tyrant realizes both death and noise obliterate human differences like few other phenomena. (Well, there’s sex; we eagerly await his noise-terrorist soundtrack to Last Tango In Paris.)

Cunning! We hear the sheets of white squawl and think, yes, this hurts my ears, but then we regress from that torture to something more closely resembling cogent human expression — rhythms, metrical shots and thuds that seem to have a purpose apart from causing us pain — and it’s not a respite, it just ADDS to our anxiety because we don’t know when the pure unfiltered hurt will return. (“Whaddya mean ‘we’, motherfucker?” — Tonto to the Lone Ranger.) The jackhammer that climaxes “The War of Currents”, whoa nelly, is sort of relaxing because at least we know this is as bad as it gets. But it’s not; it never is. There’s always the next track or the repeat button. There’s always the tedious agony of real life waiting, stretching, its forlorn unfathomability a harsher noise than Mad Tyrant, for all his cunning, will ever conjure. But Tyrant’s in good company. NOBODY can conjure it. As Mr. Westinghouse said, ears bloody and face a blank mask after a double bill of terrible godawful racket (I think it was Merzbow opening for Tesla): They would have done better using an axe. - Josh Langhoff”

Josh Langhoff is a musician & writer and has
written for The Village Voice and PopMatters.com