Left Hand Cuts off the Right

by Left Hand Cuts off the Right 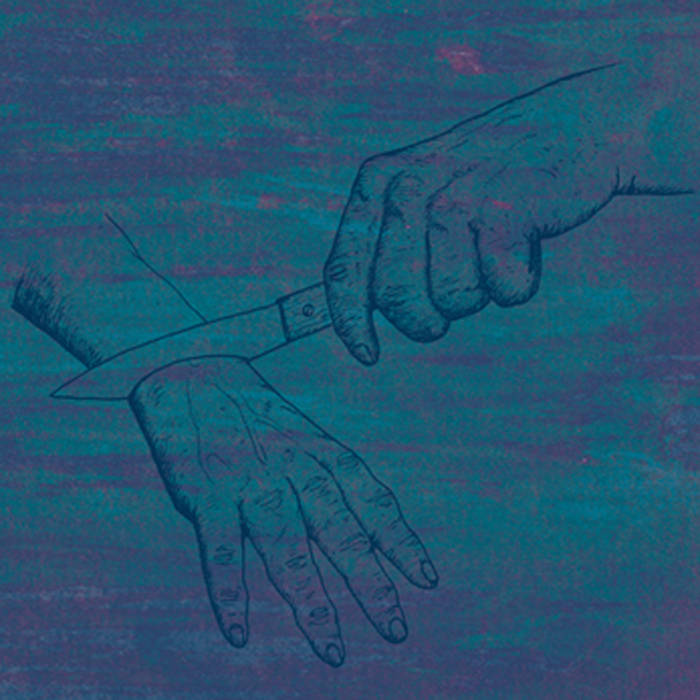 Although recorded in London and Poland, his mind seems to be somewhere in Nirvana with visions of gamelan bells dancing in his head.

A gruesome name for such an uplifting talent, but then again so is the label’s. Robbie Jenkins is a post-graduate student in sound art whose music goes round and round in mainly mesmerizing circles. Although recorded in London and Poland, his mind seems to be somewhere in Nirvana with visions of gamelan bells dancing in his head. The opening, title track, guitar and electronics, is the refracted ray of a prism captured as a wind chime in a light, constant breeze. It sounds something like the life force itself embodied. “Untitled” is a brooding, circular mediation on the piano, between whose keys wispy djinn slip in and out. The third panel in this triptych is “Piotrkowska,” in which Jenkins claws at an electric guitar with the same relaxed, circle motion, until an annoying grinding is carried in on deep, dark wave pulse. After a while you realize that this particular experiment isn’t really going anywhere, but that’s alright, because you’re just moments away from hitting the button and putting the transcendent “Goma” on infinite repeat.

Idwal Fisher
I appear to be getting more good than bad from MDR of late. Having fed me the A Band, Ceramic Hobs, Bad Suburban Nightmare and introducing me to the wonderful, twisted, sick and warped world of Dr. Steg they now lay Left Hand Cuts Off Right at my feet whilst walking slowly away backwards, head bowed, hands behind back, a gentle tug of the forelock upon shutting the door.

And what an offering it is. It isn’t not often that I mount the pulpit and urge my congregation to dip into their pockets but for once I insist. Smash the piggy bank, raid the milkman money, steal a fiver from your mums purse, take back all the empty pop bottles you can find to the chippy and when you have the requisite coffers send them to MDR and await your prize.

In the meantime you could do worse than to check out Brian Eno and Robert Fripp’s 1973 release No Pussyfooting. Now I’m not saying for one minute that what we have here fights at the same weight as No Pussyfooting but there is within Goma that same languorous, heavy limbed, head wavy, adrift on a lilo feel that Fripp and Eno captured so perfectly and which John Peel played at the wrong speed so characteristically.

Robbie Judkins is the man responsible. A sonic adventurer if ever there was one, dabbling in overtones, circuit bending, random radio transmissions and whose work seems to be split between his more noisier live outings and his more studious studio work.

The three tracks on Goma all radiate drone of course but its the way in which Judkins layers, edits and composes these tracks that really makes the hairs on the back of your neck stand up. And yes I did say compose for while I dare say that what we have here is experimentation of a sort I feel that there is a definite structure here, a sense of going from here to there via this to achieve that.

It appears most prominently on the first [title] track where what sounds like a heavily processed electric guitar is transformed into a Sunday morning bell ringing session. Whether Judkins is masquerading as Robert Fripp I know not but the way this track unfolds, with its gentle underscore of tintinnabulation and slowly building ominous drone is the stuff of a drone fans wet dreams. There’s always the chance that I’ve got my sound sources completely wrong [not the first time, wont be the last] but either way you can’t but sit back and admire the way this has been put together. Goma eventually fades away like a dying coal leaving you with some cyclical overtones of the deepest and purest hue. Sheer joy.

Track two [Untitled] is maybe piano based. A couple of lower white keys trammelled and looped before the appearance of the real thing and a three chord motif that Diamanda Galas wouldn’t turn her pointy painted nose up at. And then those lovely rolling church organ rolls that feel as if half the keys are going forwards whilst the rest are going backwards.

So what is the final track [Piotrkowska] made up of? Who knows. Like all good experimenters Judkins disguises his sound sources well. A throbbing, a swelling, a pulsing thing, tiny cymbals all a-crackle, drum rim rubbed drone, at least half a dozen things layered over one another with new sounds coming and old ones going, the whole thing rolling along like it has a life of its own until we get to the halfway mark where we’re left with just one huge bass bomb resonating into its own collapsing self. Judkins then spends the rest of the track overlaying electro-acoustic effects like looped rolled milk bottles sounds until its all too soon and untimely end.

Things of such beauty rarely come this way and its with a sad heart that I put it to one side to continue with the rest of the review pile. The urge is to play it just one more time, to soak it up, to take it with me on my travels, to push it on to people in pubs, in restaurants, stood at bus stops, here look at this, the new Pussyfooting.